What is a Hall thruster?

The Hall thruster is a type of plasma-based propulsion systems for space vehicles. The amount of fuel that must be carried by a satellite depends on the speed with which the thruster can eject it. Chemical rockets have very limited fuel exhaust speed. Plasmas can be ejected at much higher speeds, therefore less fuel need be carried on board. The Hall thruster was invented in the late 1950's. Until the mid 1990's, it has been developed primarily by the Russians. During the past 30 years, Russians placed in orbit more than 100 Hall thrusters. However, the vast majority of satellites worldwide have relied on chemical thrusters and, to a lesser extent, arcjet thrusters and ion thrusters.

A conventional electrostatic ion thruster consists of two grids, an anode and a cathode, between which a voltage drop occurs. Positively charged ions accelerate away from the anode toward the cathode grid and through it. After the ions get past the cathode, electrons are added to the flow, neutralizing the output to keep it moving. A thrust is exerted on the anode-cathode system, in a direction opposite to that of the flow. Unfortunately, a positive charge builds up in the space between the grids, limiting the ion flow and, therefore, the magnitude of the thrust that can be attained. 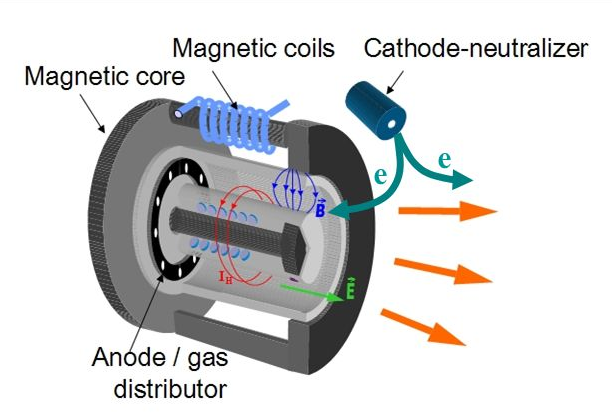 In a Hall thruster, electrons injected into a radial magnetic field neutralize the space charge. The magnitude of the applied magnetic field is approximately 100-200 gauss, strong enough to trap the electrons by causing them to spiral around the field lines in the coaxial channel. The magnetic field and a trapped electron cloud together serve as a virtual cathode. The ions, too heavy to be affected by the field, continue their journey through the virtual cathode. The movement of the positive and negative electrical charges through the system results in a net force (thrust) on the thruster in a direction opposite that of the ion flow.

Existing Hall thrusters can produce large jet velocities 10-30 km/s within the input power in the range from hundred watts to tens of kilowatts. For the state-of-the-art thrusters operating in the power range of above kilowatt, 50-60% of the input electric power goes to the kinetic power of the plasma jet. These thrusters are capable to produce the thrust in the range 0.1-1 N. Since ion acceleration takes place in a quasi-neutral plasma, Hall thrusters are not limited by space-charge build up. Hence, higher current and thrust densities than conventional ion thrusters can be achieved at discharge voltages from hundreds volts to a few kilovolts. With such performance capabilities Hall thrusters can be used to keep satellites on geosynchronous orbit (GEO), to compensate for atmospheric drag on satellite in low-earth orbits (LEO), to raise a satellite from LEO to GEO and for interplanetary missions. Besides space applications, Hall thrusters can be also useful for industrial applications such as plasma processing of materials.